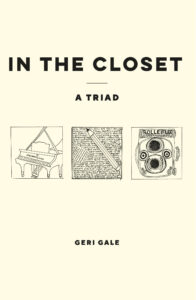 A novel about love’s wreckage.
About growing up amid intimacy and abandonment,
about redemption and sacrifice and art.

IN THE CLOSET: A TRIAD

In the Closet: a triad is a meta-story that mirrors S.’s lesbian identity and her Russian-Jewish family alongside Thelonious Monk, Emily Dickinson, and Diane Arbus.

S. lives with her grandparents in their house in Ossining, New York, where she has been abandoned by her mother, and S. is in the closet. The closet is a safe place to hide, to think, to ruminate.
In part one, S. is 10. Her grandfather is a piano-tuner in love with Thelonious Monk and his story is interwoven with that of Monk.
In part two, S. is 20. Her grandmother is a librarian and a poet in love with Emily Dickinson and her story is interwoven with that of Dickinson.
In part three, S. is 30. S.’s mother is a famous photographer, who lives in Brooklyn and is obsessed with Diane Arbus. The story of S.’s mother and Arbus weave together, and in the end, like Arbus, S.’s mother commits suicide.
S. longs for her mother. But she has the great love of her Russian-Jewish refugee grandparents and ends up accepting the lesbian love of her best friend, Sophie, who has been a rock through it all.
Instagram Readout
On Instagram, 60 readers recite the first act “Thelonious Monk” while sitting in their very own closets. Check it out at: @inthecloset.atriad